TextFenix :: Read the Early Modern classics as if they had been written today

Sir Philip Sidney was drawn to public service. He considered himself to be more of a soldier who wrote poetry than a poet who was an occasional soldier. He was regarded by the public as the embodiment of knightly virtues in both life and art. 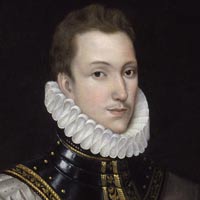 Philip was the first-born child of Sir Henry Sidney and Lady Mary Dudley in November 1554 at Penshurst Place in Kent. Philip’s father was a prominent courtier in Elizabeth’s court.

From the age of 13 onward, Philip was educated at the then recently founded Shrewsbury School and then at Christ Church, Oxford. Philip’s life of public service began early: he became a Member of Parliament at the age of 18, and that same year was a member of an embassy mission to Paris. Philip travelled extensively in Europe over the next few years. Back in England in 1575, Philip met the young lady who would later inspire his sonnet cycle, Astrophil and Stella, Penelope Devereux; their love would never be consummated, however, because she was married off to another nobleman.

Philip did not hesitate to express his personal views on political matters openly. Such conduct made him unwelcome at court, and he felt obliged to withdraw from it until 1581, when he was recalled. He used his hiatus from court to write some of his best known literary works.

Philip was knighted in 1583 and married the daughter of Sir Francis Walshingham, Elizabeth’s principal secretary. In 1585, Sir Philip Sidney was appointed Governor of Flushing (Vlissingen) in the Netherlands. He died the following year, at the age of 31, after being wounded in a battle against Spanish forces in the Battle of Zutphen. All of England mourned his passing.

Other Biographies of Sir Philip Sidney